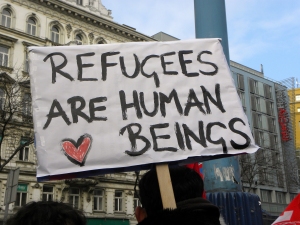 I, like so many of you, have been overwhelmed by the images on my screen, in recent months and years, of the flood of Syrian people pouring into Europe in search of safety and a future. The leaky boats and terrified faces just a small indication of the terror they must be trying to escape.  Such images have prompted much discussion here – on air, in the street, beside rugby pitches, in parks and around the dinner table. I have noticed variations in terminology to describe these desperate yet amazingly hopeful people so the purpose of this post is to help you understand the difference between a Refugee, an Asylum Seeker, a Migrant, an Immigrant and an Expat.

All these people are human beings and have one thing in common – they are somewhere that is not their home so they all have to adjust to new places, people, cultures and systems. They are exercising their Human Right “to freedom of movement and residence within the borders of each state (and) …to leave any country, including his own, and to return to his country.” *  Their motivation for being there, however, is entirely different.

With so many displaced people at the end of World War II, the United Nations set up the UN Refugee Agency to protect them. At the 1951 Refugee Convention, they defined a Refugee as someone who “owing to a well-founded fear of being persecuted for reasons of race, religion, nationality, membership of a particular social group or political opinion, is outside the country of his nationality, and is unable to, or owing to such fear, is unwilling to avail himself of the protection of that country.” ** This definition remains in 2015.

To elaborate, a Refugee may feel a sense of belonging to their home country but they have no choice but to move, in order to save their life or safeguard their freedom. Their own country does not offer them protection so they look to another country for sanctuary. In many cases, if another country will not take them in, they are often faced with death or imprisonment at the very least, back in their home country.

Permission to move to another country is granted to Refugees before they arrive. By the time a Refugee receives this permission, the majority have fled their home country and are living in makeshift lodgings or camps in a second country. Generally a Refugee has three options once they escape their home – returning home once it is safe (e.g. the Kosovar Refugees who were given temporary protection visas to Australia in 1999), local integration in the second country or resettlement in a third country.

According to the United Nations, in 2014, 1.2 Million people sought Asylum worldwide. An Asylum Seeker is someone who says they are a Refugee but whose claim has not been evaluated and determined. Asylum Seekers come to a country without permission and seek Asylum once they have arrived. Each country has there own system for processing Asylum claims and times vary as to how long these may take to reach a conclusion. If it is deemed that a person is not entitled to international protection, they can be sent back to their home country. When there are mass movements of Asylum Seekers, it is impossible to process each Asylum case one-by-one so the UN can declare these people to be “prima facie” refugees.

The Commission for Human Rights uses the term Migrant to cover “all cases where the decision to migrate is taken freely by the individual concerned, for reasons of ‘personal convenience’ and without intervention of an external compelling factor.” *** A Migrant makes the choice about when to leave their home country and where to go (within reason). Technically this movement can be within a country or beyond it’s borders. Once in their new location, Migrants tend to be committed to resettling there permanently and work to become part of the community. Their sense of belonging comes from maintaining their cultural traditions whilst merging with the new culture.

What is the difference between an Immigrant and an Emigrant? From the point of view of the country, an Immigrant is any person coming inside from another country to resettle. National Borders need to be crossed. Some Immigrants are legally authorised to be there (e.g. Migrants and resettled Refugees), others are not and regularly referred to as Illegal Immigrants (e.g. Asylum Seekers). An Emigrant is someone who is moving out of the country permanently.

An Expatriate or Expat is similar to a Migrant in that they both voluntarily relocate. An Expat, however, relocates abroad and always anticipates returning home at some point. Expats are often relocated due to employment and for a specific timeframe. They tend to be less involved in their host country than Immigrants or resettled Refugees but more committed than tourists. As early as the 1950s Social Scientists Drs John & Ruth Hill-Useem observed that Expats preferred to spend time with other Expats even though they were from different cultures and countries. Continuing in the 21st Century, Expats form a lifestyle that is different from the host or home culture but common to them all in that particular setting. In this “Third Culture,” the sense of belonging comes from the commonality of the Expats’ internationally mobile experiences despite the differences in nationality, cultural heritage or ethnicity.

As those heartbreaking images move across your screens, I hope this post has given you some understanding of the differences between these internationally mobile people. Having lived abroad, I know the challenges associated with a voluntary move. I can’t begin to imagine the grief, loss, trauma and despair that these Refugees and Asylum Seekers are feeling and the challenges that lay ahead for them. I am praying for extra measures of resilience for them and compassion for those working alongside them. We are all human beings.

* The Universal Declaration of Human Rights